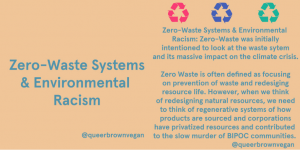 Zero waste and environmental racism is a human right issue. Communities are not created nor designed equal, many BIPOC communities globally are the ones living in nearby toxic facilities — waste incinerators being one of them. Zero-Waste was created back in 2002 by the Zero Waste International Alliance and was later peer-reviewed internationally in 2004 and accepted as a legitimate definition. Since then, ZWIA updated their definition in 2018 to clearly define Zero-Waste as the following, “the conservation of all resources by means of responsible production, consumption, reuse and recovery of products, packaging, and materials without burning and with no discharges to land, water, or air that threaten the environment or human health” (ZWIA).

The term itself was intended for businesses and communities to follow guideline practices to ensure a sustainable future. However, the zero-waste movement has often portrayed the consumer as the problem and encourages individuals to make immediate changes in their lifestyles. Corporations have contributed to environmental racism by flooding markets with plastics and working closely with fossil fuel industries to create racial disparities. If we want to redesign a system where resources are ethically sourced and communities are treated with respect, we must delve deeper than our individual behaviors and begin questioning the bigger picture.

Zero-Waste Is An Ancestral BIPOC Practice

Zero-Waste isn’t new, it has always been practiced by BIPOC communities throughout the world. Many of these communities practiced regenerative, sustainable, and circular lifestyles that had a minimal environmental impact. Take for example the Aztec people of Tenochtitlán, they were known for building and designing chinampas in their cities. Chinampas were essentially floating gardens where Aztecs were able to produce artificial land on freshwaters for their agricultural practices. Through their circular practices, they knew how to continue enriching their soils by disposing of organic waste and repeating the same nutrient cycle over and over again. They even developed educational systems where students, “developed a resource-efficient culture that made the best use of any available resources in order to survive. These factors shaped their waste management practices.” (Our World).

Many cultures throughout the world had unique relationships with their lands that allowed them to practice zero-waste — modern society often disconnect from this reality and the importance of historical implications. However, it’s important to recognize that many BIPOC individuals still have these relationships and traditions in their blood. For myself, I grew up low-income and remember my parents instilling the values of sustainability as a form of survival since we didn’t have much to grow up with. I was taught zero-waste through a resourceful lens and it was seen as unappealable or “poor” by many of the students at my school. 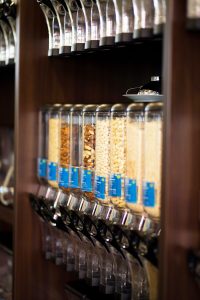 Back in 2009, Zero-Waster known as Bea Johnson began her blog about living a sustainable lifestyle that it sparked the curiosity of many people to look into the lifestyle she was living. In 2010, media began to cover this minimal reduced lifestyle and it soon became more popularized throughout 2012- to now. It was noted by several media outlets like Vox that mainly millennial women were invested in living the lifestyle and there was lack of presence for males in the movement. In a recent article written by Grist, it found that “55% of LGBTQ+ adults vs. 33% of straight adults said they care a lot about green issues”. Because of toxic masculinity being perpetuated in a heteronormative society, the burden of most environmental movements falls on the burden of women while males feel that being eco-friendly is a “gay” thing” (Grist).

However, many people in the environmental movement have shared that zero-waste can often be inaccessible and a privilege for people. The modern zero-waste movement has also had issues with diversity where a majority of the people represented and highlighted in the movement were White women. When we aren’t including BIPOC Environmental Zero-Wasters in conversations, we are attempting to erase ancestral knowledge.

For so long, the rhetoric of modern zero-waste has told consumers to continue reducing their waste and finding eco-conscious lifestyles to live for while corporations contribute to the slow murder of BIPOC communities throughout the world. Plastics contain petrochemicals and are derived from petroleum, known as fossil gas (EcoWatch). It was even found that Petrochemicals are becoming the “largest driver of global oil consumption” according to a 2018 report made by the International Energy Agency. With the increased dosage of plastics being produced yearly, it creates further questions of where those plastics will end up.

Only around 9% of plastics are ever properly recycled which again reinforces the fact that many of these industries are not properly monitoring the environmental impact. Most plastics are then burned in waste facilities where they contribute to 2% of global emissions (EcoWatch). With the demand decreasing for gas throughout the world, fossil fuel industries look for ways to stimulate growth in order to further increase their GDP growth. Despite experts have expressed concerns about the production of plastics, many fossil fuel corporations continue to further expand their partnerships with chemical industries.

However, in recent years many countries have been banning single-use plastics and even countries that have been heavily exploited by colonialism have started to cut ties with countries like the United States and the U.K. The oil and gas corporations are threatened by these types of actions and are always looking for loopholes to continue being able to sell plastics in countries where it isn’t banned yet. 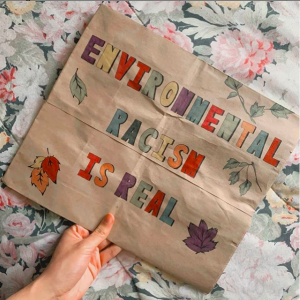 Environmental Racism In The World

Zero waste and environmental racism have always been interconnected. We cannot think that reducing our waste will make the corporations produce less, while they continue to inject subsidies for plastics in markets. Take for instance, the Philippines where the Global Alliance For Incinerator Initiative Organization stated that “ Inadequate waste management systems and human negligence are often cited as the main contributors to plastic waste leakage into terrestrial and marine environments—but waste and brand audit data in many parts of the world are helping reveal that the unfettered production of disposable plastic is the actual problem (GAIA).

Another thing we should realize is that when looking at the number of plastics for each country, many countries that have been exploited by environmental colonialism have high amounts of plastic because they were delivered from countries like the United States and the U.K. It was found in the United States that, “ 79% of the 73 incinerators in the US are located in BIPOC communities” and when plastics are burned it releases deadly chemicals such as mercury into the lungs of BIPOC.

Zero waste and environmental racism are real and it’s no doubt that it has created a global environmental injustice for people and their lands. Redesigning a system for waste means dismantling colonial structures that have upheld white supremacy by disproportionally murdering BIPOC. If you truly care about BIPOC, then you must challenge yourself to think critically. Zero-Waste is a human rights issue, and without delving deeper into waste systems than our eco-friendly behaviors, we may fail to protect the future of this planet.