What is Climate Doomism? 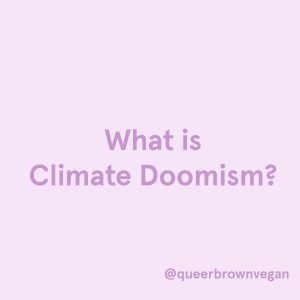 At young ages, many Black, Indigenous, and People of Color are often taught to normalize pain, whether it’s social, racial, or environmental injustice. These injustices have influenced the understanding of BIPOC on how they can react in both external and internal situations. BIPOC often find themselves silencing their pain, continuing to exist in an extractive capitalist system designed to oppress marginalized communities. Climate Doomism is a popularized term that has risen on social media by predominately media news outlets exclaiming that there is no hope left in the future for the planet. We can refer to climate doomism as the pathway to ecological destruction due to anthropogenic actions created by human society. However, climate doomism is often used as a scare tactic to disempower collectivized communities on their journey for environmental liberation. Most often not, climate doomism is never specific in addressing the role of white supremacy and how it has contributed to global environmental injustice.

The same scientists who have done extensive research on climate and the environment are the same ones that often fail to communicate the information in an accessible way to communities that are the most impacted. In fact, it’s not that the communities don’t know what’s happening because they already know, but there is a large culture, educational, and language barrier. Researchers are heavily trained in methodologies, analytical skills, and communication with other scientists, yet they don’t receive culturally extensive skills to translate to communities. Environmental Sciences, which I majored in at the University of California, Berkeley, lacks diversity in its courses. I was first introduced to climate doomism when I was a freshman in college. At a holistic level, the research space in science has failed to meet diversity, especially in the climate, environment, and conservation field, with only 3% of Black scientists obtaining an environmental science degree and 10% of Latinx compared to 70% of White students. According to the EPA, people of color are often the ones to face the highest rates of environmental burdens, which allows them to understand the severity of the climate crisis through a personal lived lens. Low-income BIPOC students who then become researchers or scientists are often better communicators to helping create an accessible form for people to link climate, race, and class. When we can empower students of color, we can create pathways for sustainable change, one that is rooted in reciprocity and resistance.

Who Gets To Write About Climate Doomism In The West?

The climate crisis has no boundaries whatsoever. Of course, if you are affluent and able to invest in climate infrastructure, then there is a chance that you are using wealth to avoid accountability. The climate crisis has been happening for many countries, generally framed at the beginning as global warming, then to climate change, and now the climate crisis or even climate chaos. The West has played a huge role in silencing narratives from countries that have been the most exploited. Many countries in the Global North that are now witnessing an increase of natural disasters, whether through landslides, hurricanes, wildfires, tornadoes, or heavy storms, are recognizing that the infrastructure built will not sustain their bubbly livelihood. In other interviews with climate survivors from the Global North often leave remarks of them expecting this to happen in a developing country but not here. This shows how lack of education and understanding of Earth systems has programmed individuals to believe that living in wealth and a developed country will automatically protect them. Still, their plea to governments to assist them has also failed them. People displaced due to climate events develop tierratrauma, which is land-based trauma from living in those environments that experienced climate disasters.

A Case Analysis On Those Affected By Wildfires

In the film Rebuilding Paradise Fire, the citizens of Paradise of Northern California lost their homes to the wildfire that displaced 50,000 residents, killed 95 people composing of elderly and disabled people, and one of the worse first recorded in California. While the energy giant PG&E also played a huge role in the destruction of the ecosystem, we must not forget that it was found that climate change contributed to the explosion of fires that burned the town into ashes in a matter of hours. When I was a senior in college, the whole sky was filled with black ashes from the Paradise fire in 2018 and as a student who also worried about climate doomism, I still had to take my midterms and continue as if everything was normal.

Is It The Loss Of Power & Safety That Worries People In The Global North?

Climate doomism articles are often written by White scientists that undoubtedly continue to fuel the fire of doom and the end of the world. However, we need to recognize that BIPOC communities globally have been facing climate disasters at higher rates. In essence, more people are affected than before. Still, we must interrogate these articles and who they are centering because it is a shame to see that people care for the environment when White people are being hurt but not when BIPOC are dying from climate disasters. What do these titles serve when it almost seems to ignore the work grassroots activists have done completely. In reality, communities and institutions create change, but communities create sustainable change for the survival of their communities. Unfortunately, it shouldn’t take White people dying or being hurt from climate disasters for people to start caring about the planet when for decades, BIPOC have been hurt or killed by climate injustices. The massive guilt that is expressed from groups who have had privilege over not having to worry about the climate change are now turning their despair into doom, which directly affects marginalized communities.

Human supremacy and climate doomism often work simultaneously in creating an illusion that our own existence is polluting the Earth.Human supremacy is defined as humans being superior and separate from nature. Human supremacy framing allows for the continued lack of accountability of many of the existing polluting industries like fossil fuel, petrochemical, and other polluting projects stemmed from white supremacy, one that was rooted in enslaving people of color and displacing them from their ecosystems. Western media outlets often ignore the root causes of the ecological crisis and rather frame communities as the problem rather than corporations, multinational institutions, and giant billionaires. Human supremacy framing in climate doomism leads to divisions in movements—harmful myths like overpopulation that blame people for the ecological crisis target low-income BIPOC. We need to recognize that climate doomism being framed as a human supremacy issue will influence people to project their hate and insecurities on immigrants. Concepts like eco-fascism and eco-xenophobia have been rising over the last few years.

Research As Resource Acquisition and Displacement

In science, we have seen how research has been used to interrogate BIPOC and justify resource acquisition as a prime spot for economic growth for the Global North. Environmental colonialism, the concept that looks into how Western countries situate themselves in countries in the Global South to acquire and deplete their natural resources from Indigenous communities. Native ecosystems have severely been altered due to colonial practices. This still applies today, where we see the massive amount of resources still being extracted, whether for minerals, water, and other natural resources through the help of multinational institutions and governmental systems. To understand our framing of these issues, we must apply an anti-colonial, anti-imperialist, and anti-racist lens to our environmental work to be clear with climate doomism framing. The IFFC report that is set to be released on August 9, 2021, will have disturbing facts about the future for our environment that many BIPOC has to normalize yet again as if they haven’t been telling governments, scientists, and institutions that they are being affected by environmental injustices daily. It is time that we recognize that collectivized vulnerability allows us to hold space for each other during these movements.

The struggle for many marginalized groups has always existed and many of us carry that pain every day. Adding another layer of the stress of climate injustices almost seems impossible that we aren’t doing enough. I refuse to fall into climate doomism because resistance in movements have always existed to create a just regenerative world. We need to remind ourselves that we must cultivate within our community to create sustainable change. We have to extend beyond the Global North countries and recognize that people have experienced land-based trauma from natural disasters and show up for everyone, whether donating, holding spaces online, or collaborating. What isn’t sustainable is climate doomism, but what is sustainable is the power that communities have been holding to create change. Yes, we are building and theories of change are constantly evolving to represent the most affected. Sustainably loving ourselves requires creating circular relationships with our community, land, and self. There are days I feel weak and strong at the same time, there are times where I am told I am not doing enough, and there are days I know I am impacting at least one person in my life. The thing is, the society we live in today beats us down to think we are hopeless and powerless when in reality, we as beings hold much power to create unity amongst ourselves. We must reckon with our toxic selves and hold each other accountable so no one has left behind this movement.

Resources For Those Feeling Climate Doomism

You are the greatest resource to your community. For me, education is the true wealth of our movement. I created the Climate Emotions Scale a few months ago with terms coined by sustainability professor Glenn Albrecht, which you can find below. Additionally, you can read the article here.

Some Action Steps To Consider

1.) Find your community, what are the existing movements happening in your area 2.) Holding space with friends or loved ones, who can you connect with to talk about how you are feeling? 3.) Find your role in this movement. You can be an activist, educator, painter, designer, artist, etc. 4.) Reference ongoing movements that are happening. The resistance in movements is not new. 5.) Validate your existence. You can feel hopeful and hopeless at the same time. We are unique beings that have complex emotions. 6.) Recognizing Indigenous sovereignty and the resistance in their movements that have been fighting for environmental justice.
Aug 9, 2021Leave a Comment on What is Climate Doomism?